Coddy offers geolocated games in your city. Much more than games, they are experiences in which we invite you to participate with friends or family.

Around completely new and different themes from each other, as a team and using a mobile app, you will conduct investigations, solve puzzles and mysteries by carrying out missions.

You will be at the center of the stories: each scenario will challenge you to make the right decisions (... or not, it's up to you ;-)).

Start by taking a look at our site and take a look at the different games on offer. Some games are permanent, which means that you can play them whenever you want, any day and any time (great, right?)! The others are "event" games, they will only be available on certain dates.

Did you find your favourite theme? So find the date that suits you, the city in which you want to play and order your ticket and that of your friends (1 ticket is valid for 6 places!). You will then receive by email the codes which will then have to be entered in the application.

Once all this is done, depending on the type of game you have chosen, you can either start directly or wait until D-Day to play it.

History tells us that big children came together one day with the idea of ​​putting games at the center of our lives ...
Long-time friends, Didier and Séb, a Belgian and a Frenchman (we can't all be perfect), came together a few years ago to develop a geolocated mobile application project. From there came the idea to also produce unique and fun games. For this, they had to find THE developer capable of transposing ideas and concepts on paper (or rather on application). It was there that Stéphane, born in Liège, joined the team. And like all self-respecting Belgian, it was around a beer (and the little sister) that the Coddy project was born.

Coddy… or not Coddy.
All stories have many twists and moments of suspense: well we are not at all on a Stephen King-type plot, but Coddy was almost never born. Before developing the application as you know it today, it was first considered for team building, then as a rather tourist application.

Coddy must go on.
Last June, the hour for questioning had struck. It was time for the trio to decide on what would become Coddy and refocus on what really made them vibrate, for what they had dropped everything, the reason why they wanted to get up in the morning (before their kids and their dog), in short: games. The game has therefore resumed its central place within the team and Coddy was born, online and in bone!

“Only number 10 in my team”
Today the project brings together a small team of 6 people: Coddy is Didier, Seb and Steph but it is also Romain (back-end developper), Morgane (front-end designer) and Estelle (Marketing Assistant).

What happens next?
Coddy starts in Belgium, in several French-speaking cities (Brussels, Mons, Charleroi, Liège and Namur) but we do not intend to stop there. The scenarios are already translated into three languages ​​to allow as many people as possible to have fun with our games. Other cities, other countries and other languages ​​will be part of the Coddy catalogue in a while. 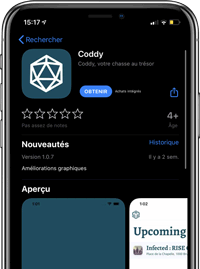